The Time for War

What is it we are remembering at this time?

I am remembering how many young people are sent to kill or be killed by other young people. They are the sacrifices for our resistance to peace making. Whether they survive or die, war scars everyone and we know that each war begets the next war.

I am remembering the futility and waste wrought by violence, revenge. I want to rescue the children of the world from these desperate and hopeless efforts. I want to say to the rich men whose greed and ambitions require the sacrifice of our children, “Show us how much you will profit from this war. Show us what you hope to accomplish.  And then we will tell you whether or not we think it is worthwhile.” When the revelations about how the world wars were engineered and the propaganda that hid greed and prejudice, my war hero father was reduced to tears. He had broken his soul for the sake of what he believed to be pure ideals of freedom and safety for all.

Please understand, I am not depreciating the courage and commitment of those who serve in the military. I am not suggesting that their sacrifices should go untold or unrewarded. I want us to understand that we must be prepared for the healing that will need to ensue and its expense in time, money and energy.

I am also suggesting that we admit the period of war as it has been fought is over. No one wins wars any more, if they ever did. We are all the puppets of large corporate interests unless we resist. As Christians, part of our task is just that, to resist the powers that choose violence and prejudice, that choose colonization over cooperation, that have very little concern for the individual lives they affect.

The time for fighting on battlefields is over. We must insist on other forms of conflict resolution. We must not support the voices that use fear and ignorance to make political gain. The time for the sacrifice of generations is over.

I am reminded that we were told to stop sacrificing our children early in our history. We were told that although we had understood that to be God’s will, we were wrong.

When they came to the place that God had shown him, Abraham built an altar there and laid the wood in order. He bound his son Isaac, and laid him on the altar, on top of the wood. Then Abraham reached out his hand and took the knife to kill his son. But the angel of the Lord called to him from heaven, and said, “Abraham, Abraham!” And he said, “Here I am.” He said, “Do not lay your hand on the boy or do anything to him; for now I know that you fear God, since you have not withheld your son, your only son, from me.” …..So Abraham called that place “The Lord will provide”; as it is said to this day, “On the mount of the Lord it shall be provided.” (Genesis 22)

About this passage, Michael Lerner comments in Jewish Renewal (p.48) “Here Abraham stands out as the being whose life gives us the barest hint, yet enough to be a message of hope, that it is possible to break the chain of necessity, that we do not have to pass on to the next generation what was done to us.”

For Christians, one of the stories that illuminates this idea is Jesus’ arrest in the gospel of Luke:

When those who were around Jesus  saw what was coming, they asked, “Lord, should we strike with the sword?” Then one of them struck the slave of the high priest and cut off his right ear. But Jesus said, “No more of this!” And he touched his ear and healed him. (22:49-51) 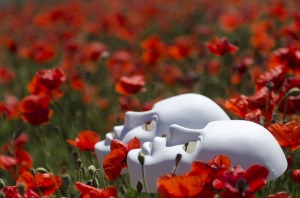 Perhaps we should wear these poppies every day to remind us that violence is a choice we make for others, but that peace is a gift for the living. May all those who have fought in war, rest now in peace. May their souls be at peace. May they send us their strength to renew the earth in compassion.

This site uses Akismet to reduce spam. Learn how your comment data is processed.